At the end of October 2018 on the Qt development mailing list it was announced that CMake was chosen as the build system (generator) for building Qt6. That also meant that The Qt Company will gradually stop investing in their in house Qbs build system.

I personally think is a good idea to have major C++ projects like Boost (July 2017 switch announcement! ), LLVM/Clang, and now Qt to use CMake as their build system (generator). We C++ developers should work together in having a common build system.

Since I am lucky(

Notice how I am using CMake 3.13.x’s -S and -B parameters! No more mkdir builddir && cd builddir commands anymore! Yeah!

The configuration step had some problems because it uses try_run and I was cross-compiling. Running the script a second time worked out fine.

The failed CMake configuration was due to:

The compilation fails at some point because libuv doesn’t have QNX support. The following patch gets things working!

What happens if we want to build cmake-gui? CMake is shipping cmake-gui for Windows/Mac/Linux as a GUI application statically linked to Qt.

The magic part above is the -xplatform qnx-x86-64-qcc. I don’t build icu, fontconfig, because the QNX 7.0 VMware image doesn’t provide them, and I felt that it defeated my goal to deploy *.so files, hack LD_LIBRARY_PATH, and so on. I just wanted to run ./cmake-gui.

The toolchain does have libicu, which is quite a monster (31.4M!):

My CMake build script would change to:

As it turns out I hit QTBUG-54666: CMake fails to configure Android build!

The CMake package files that Qt provides require some C++ compiler features to be present.

So what did CMake detect using our QNX toolchain? Let’s just take a peak!

The above bug report has some workarounds for this problem, but what if we fixed this? QNX has QCC as a compiler wrapper around GCC, so what if I used GCC directly?

I came up with this small QNX toolchain:

Now I was able to compile, but not to link. Oh no!

I had a look at what CMake was doing for Windows and came up with similar approach for QNX.

I needed to apply the following patch:

That looks pretty scary! That’s because Qt’s CMake files do not track dependencies when built in static mode.

Until Qt fixes their CMake files, we could just do the following:

cmake-gui builds and links fine now. In order to run it on the VM, I need to have sftp / ssh access. This is done by running vi /etc/ssh/sshd_config and change # PermitRootLogin no to PermitRootLogin yes.

After deployment and running /etc/graphics-startup.sh I was able to run /root/installdir/bin/cmake-gui, but then got these nice warnings:

This can be fixed in two ways, either set QT_QPA_FONTDIR environment variable to /usr/share/fonts, or create a symlink like:

And now I can present this beautiful screenshot: 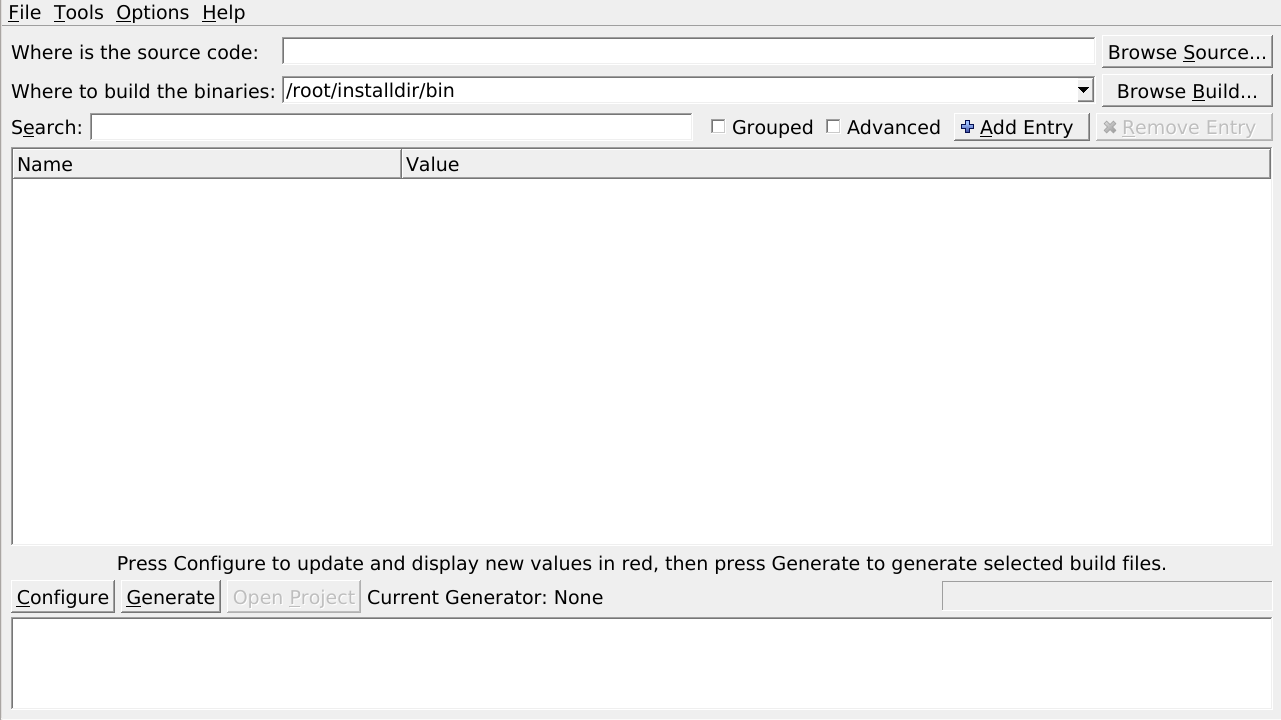 Let me see you stripped!

CMake when it uses GCC/Clang it builds binaries unstripped, with debug information. Let’s see how big the above resulted binaries are:

CMake does have in the CMakeCache.txt an entry called CMAKE_STRIP, which is the case of the original QNX toolchain is set to /usr/bin/strip, because CMake’s share/cmake-3.13/Modules/CMakeFindBinUtils.cmake has a bug for QNX, it can’t determine the ${_CMAKE_TOOLCHAIN_PREFIX} variable!

This is the reason why the original QNX toolchain had entries to ar and ranlib utilities.

But how can we use CMAKE_STRIP? Well, CMake has an undocumented target named install/strip!

How big are the binaries now?

CMake starting with version 3.9 has support for Interprocedural optimization (IPO) for GCC and Clang compilers.

If we have a look at share/cmake-3.13/Modules/Compiler/QCC.cmake we could find:

CMake 3.13.0 source code doesn’t have support for building with IPO, but applying the following patch enables it:

The binary sizes are:

In the article Improving C++ Builds with Split DWARF we learn about -gsplit-dwarf compilation flag which speeds up compilation times in Debug mode.

Let’s build a normal Debug build with this script:

The builddir and installdir sizes were:

I searched after the presence of dwo files. This works starting with QNX 7.0!

The builddir and installdir sizes have become:

Remember how QCC is a wrapper for GCC, when coupled with ccache you should make sure that you have direct hits and not preprocessed ones!

This can lead to 30% speed degradation, depending on your QNX toolchain and ccache usage.

This version of the build script enables ccache, and since we use GCC directly we should mostly get direct hits:

I don’t know why I had 4 preprocessed cache hits

Qt Creator has had some problems with the QNX / CMake integration. For example these bugs:

The good news is that with the GCC toolchain file these bugs are no longer reproduceable!

Devil is in the details

If we have a closer look at what CMake compiler detection cmake file (builddir/CMakeFiles/3.13.0/CMakeCXXCompiler.cmake) contains for the CMAKE_CXX_IMPLICIT_LINK_LIBRARIES, we can see that there is a difference between the original QNX toolchain file and my own. It’s mainly about libgcc.a.

Luckily CMake can be configured to adjust to this, and my toolchain file is a bit more complicated

If you want an ARM 64 version, just change these two lines:

I hope you have enjoyed this C++ compilation ride in the world of the exotic operating system that is QNX!